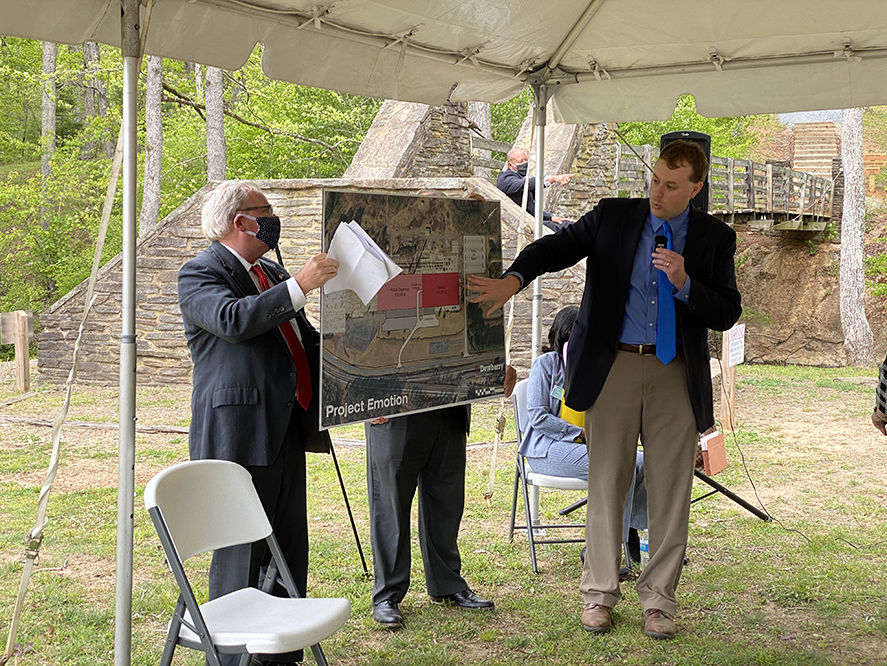 Pittsylvania County Economic Development Director Matt Rowe gestures at the map of the planned plastic manufacturing facility to begin construction in the Southern Virginia Multimodal Park in Hurt this summer as board member and Danville City Councilman Fred Shanks holds the map. 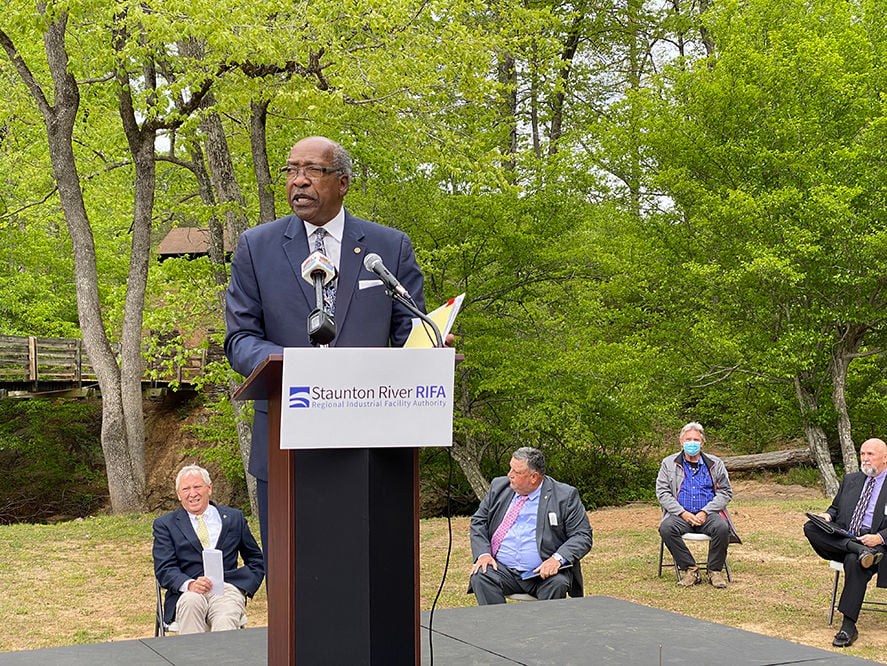 Staunton River RIFA board chairman and Danville City Council member Sherman Saunders stands at a podium at Wayside Park to announce the partnership between the RIFA board and Staunton River Plastics LLC in May. 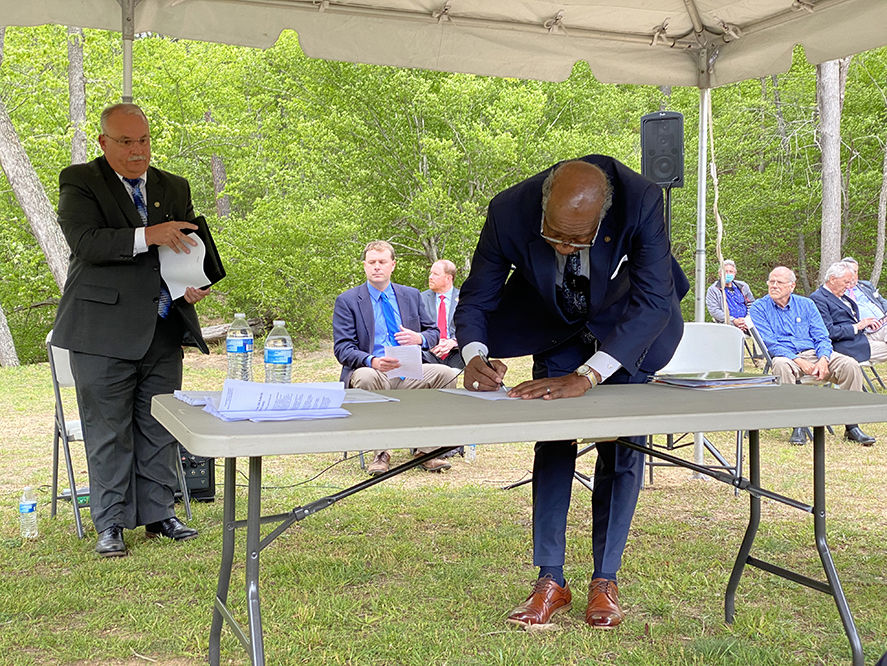 Pittsylvania County Economic Development Director Matt Rowe gestures at the map of the planned plastic manufacturing facility to begin construction in the Southern Virginia Multimodal Park in Hurt this summer as board member and Danville City Councilman Fred Shanks holds the map.

Staunton River RIFA board chairman and Danville City Council member Sherman Saunders stands at a podium at Wayside Park to announce the partnership between the RIFA board and Staunton River Plastics LLC in May.

Today members of the Staunton River Regional Industrial Facility Authority (RIFA) announced a local performance agreement they had reached with Staunton River Plastics Inc, a manufacturer which will bring 200 new jobs to Hurt.

Leading the announcement was the Staunton River RIFA chairman Sherman Saunders as he stood atop a stage constructed in the grass field of Wayside Park.

“I am proud of the partnerships that have been forged between the City of Danville, Pittsylvania County and the Town of Hurt in order to encourage investment and job creation within our region,” said Saunders, one of the three members of the Staunton River RIFA which come from the Danville City Council. “As Chairman of the Staunton River Regional Industrial Facility Authority, we welcome Staunton River Plastics, LLC as the first tenant within the Southern Virginia Multimodal Park. By expanding its footprint into Hurt, this company will provide quality employment opportunities for residents throughout the Southern Virginia region.”

The 250,000 square-foot facility will begin construction in the summer, and will be the effort of a $34 million investment. Staunton River Plastics has secured a long-term contract with a Fortune 500 company in the health and beauty industry to supply injection molded and stretch-blow molded plastics.

Staunton River Plastics is a wholly owned subsidiary of Rage Corporation, an Ohio-based plastics manufacturer that already owns a manufacturing facility in Altavista.

“Staunton River Plastics is excited to join the Southern Virginia Region business community,” said future Staunton River Plastics Plant Manager Greg Wood. “This new operation will provide opportunities for many in the area to be part of a growing business of injection molded plastics. Having a broad selection of talented people in the area, combined with the availability of advanced training programs through local and regional school systems, was a major factor in choosing this location for our production facility. We look forward to being a positive addition to the community of Hurt, Virginia.”

Tim Dudley, RIFA member and representative for the Staunton River district on the Pittsylvania County Board of Supervisors, made the motion to approve the performance agreement as the authority officially met underneath a gazebo put up next to the iconic stacked stone bridge of Wayside.

“Being the County’s board district representative for the Town of Hurt and the Southern Virginia Multimodal Park, I am extremely grateful for today’s exciting news,” said Timothy W. Dudley, Vice-Chairman for the Staunton River Regional Industrial Facility Authority, and Pittsylvania County Board of Supervisor for the Staunton River District. “This particular site is part of our region’s cultural fabric, as generations of families and friends have supported their loved ones working in the former textile mill. It is comforting to know that Staunton River Plastics will repurpose a portion of the site for its new modern plant and create jobs for our residents, while also being the first tenant in the industrial park.”

Project Emotion has been a collaborative effort between Pittsylvania County, the City of Danville, the Town of Hurt as well as Virginia Economic Development Partnership, the Southern Virginia Regional Alliance, and the Virginia Tobacco Regional Revitalization Commission.

The project received direct assistance from Gov. Ralph Northam in the form of a $500,000 grant from the Commonwealth’s Opportunity Fund as well as a performance-based grant of $300,000 from the Virginia Investment Program.

This is a project that has been over three years in the making, as it dates back to the founding of the Staunton River RIFA board in 2017.

“On February 23, 2017, Pittsylvania County proudly signed a letter of intent, along with our member partners, to establish the Staunton River Regional Industrial Facility Authority in an effort to redevelop the Southern Virginia Multimodal Park in the Town of Hurt,” shared Robert W. Warren, Chairman of the Pittsylvania County Board of Supervisors. “Then, earlier this year, that created Authority coordinated the removal of Burlington Industries’ remnant smokestacks from the site in an effort to make it ready for an impactful project. It is incredible to think that within three years, three localities were able to work together with private parties to not only ready the site, but to also secure a major first tenant.”

Warren took his time on the stage to remark at the progress of Wayside Park, which is in the process of an over $1 million dollar renovation project to revitalize the aging park for the Hurt area.

Warren also said that the plastics manufacturer will be making plastics for critical health industry items of special importance during the COVID-19 pandemic.

Several officials in attendance gave special thanks to the economic development directors for Danville and Pittsylvania County, Corrie Bobe and Matt Rowe, as well as Lucinda Green, executive director for the Southern Virginia Regional Alliance.