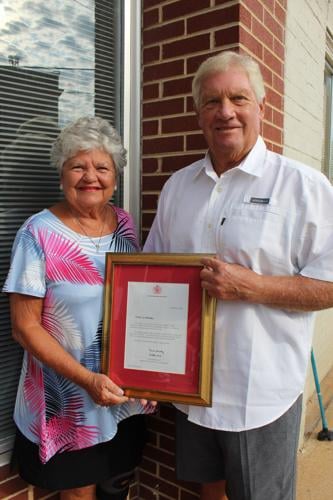 The Bowmans with the letter they received from Buckingham Palace thanking them for a gift to the Queen during her visit to Virginia in 2007. 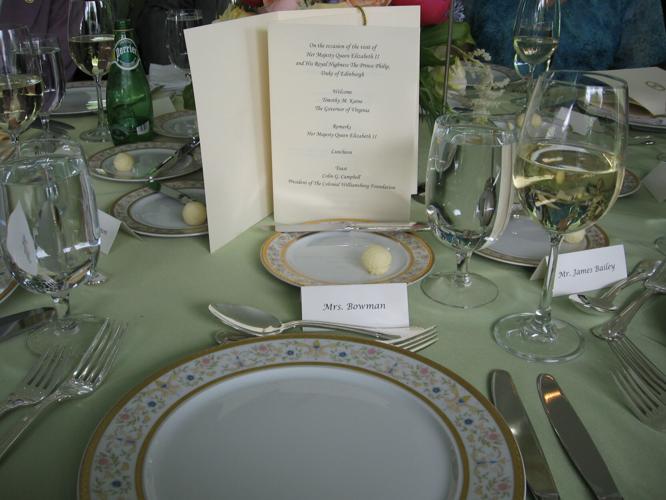 The table setting for the 2007 lunch with Queen Elizabeth II in Williamsburg.

The Bowmans with the letter they received from Buckingham Palace thanking them for a gift to the Queen during her visit to Virginia in 2007.

The table setting for the 2007 lunch with Queen Elizabeth II in Williamsburg.

The death Queen Elizabeth II and the elaborate protocols for her mourning and funeral brought back memories for one Dry Fork couple who had the honor of dining with Her Royal Majesty in May 2007.

Ken and Brenda Bowman were in the process of moving to Pittsylvania County when Jamestown was celebrating its 400th anniversary. At the time, Ken was the chairman of the York County Board of Supervisors and he, along with Brenda, were two of many state and local dignitaries invited to a luncheon for the Queen held at the Governor’s Palace in Williamsburg.

After all, Jamestown is where the English first arrived in the New World in 1607. Yorktown Battlefield, located in York County, was the site of the last major battle of the Revolutionary War — a war fought by the American colonists to sever its ties with England and King George III.

Like the funeral that was conducted Monday at Westminster Abbey, the luncheon had its own set of rules to follow, such as when to put down one’s fork, said Brenda, adding that guests could lay down their folk only after the Queen put hers down. However, the Bowmans were not close enough to see her fork. Hats for women were optional and Brenda did not

With about 100 people at the luncheon, the Bowmans were able to see the Queen, but did not meet her in person. Prince Philip, meanwhile, had decided to tour the shipyards in Newport News and Norfolk, so he was not at the luncheon.

The Bowmans offered a gift to the Queen — a brooch and earrings featuring the three ships that first arrived at Jamestown in May 1607— the Susan Constant, Godspeed and Discovery — as well as a handwritten card that included a preserved dogwood flower — the Virginia state tree and flower.

The Bowmans were touched to receive a personal letter from Buckingham Palace thanking them for the gift.

Elizabeth was the only person most have ever known as queen, he said.

“She is loved by everybody,” said Ken, adding that what he admires about the monarchy is its stability.

“We’re just glad to have been a tiny part of her history. It’s something we’ll never forget,” he said.

Danville’s Police Chief was a finalist for the top police post in Colorado … but he’s taken his name out of the running; Has Pittsylvania County maxxed out on solar farms; A Danville convenience store clerk and four teens are facing criminal charges after a car crash in North Carolina.