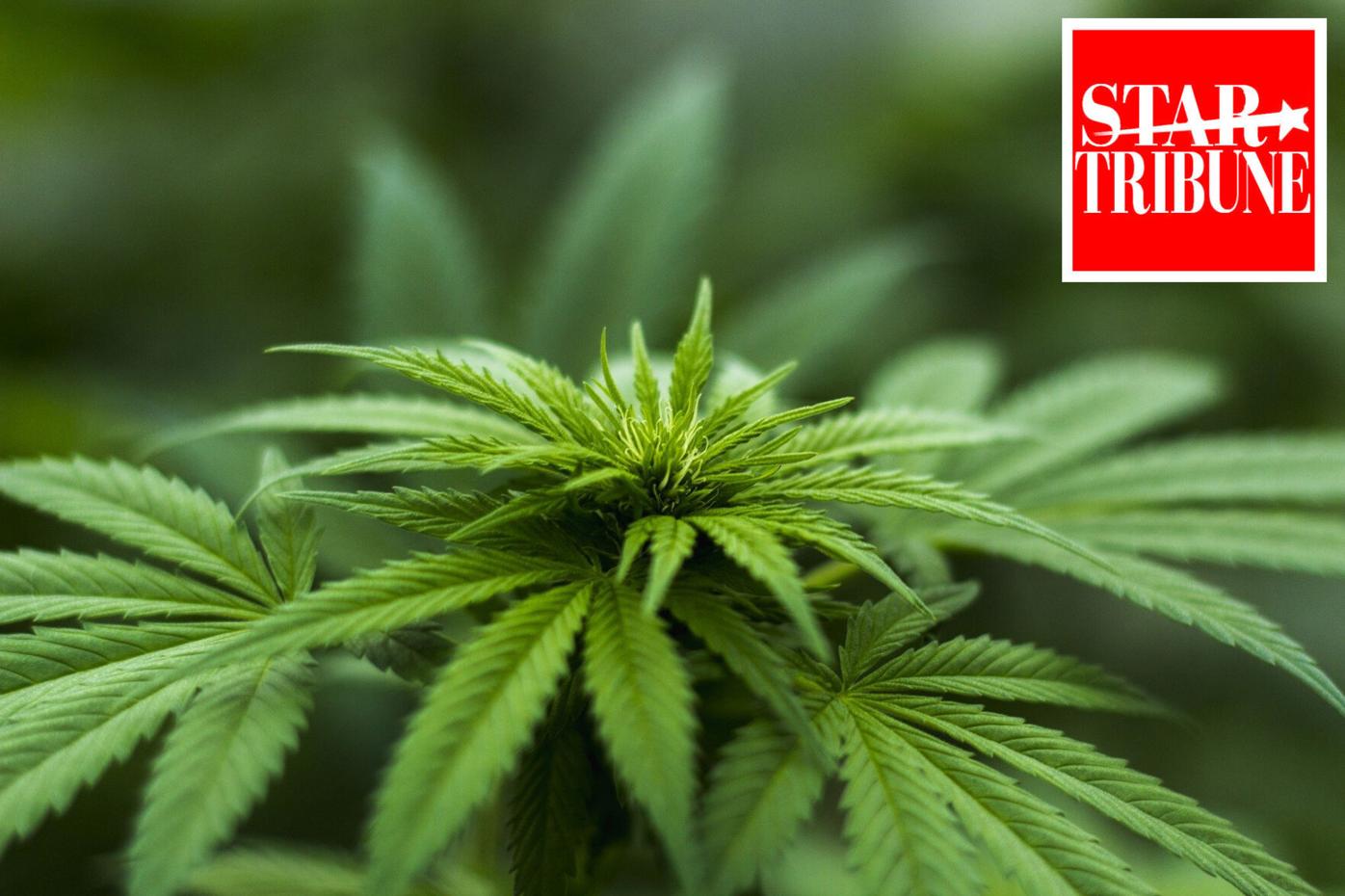 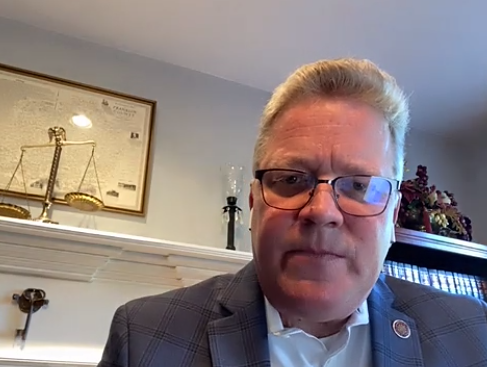 Sen. Bill Stanley (R-20), who serves over part of the City of Danville, part of Pittsylvania, Halifax, Franklin and Carroll Counties, all of Henry and Patrick Counties and all of the Cities of Galax and Martinsville, speaks at the Danville-Pittsylvania Chamber of Commerce's 2021 Legislative Update early Monday morning.

Legislators discussed a myriad of locally impactful topics in reflection of the assembly's 2021 session, arriving to a consensus about a handful of key issues—namely, the legalization of marijuana in Virginia and the effect of regionalism in the commonwealth's public school systems.

Marshall, who previously voted "yes" on decriminalization of marijuana in Virginia, stands in opposition of the bill.

"The marijuana bill could have been about a paragraph long," Marshall said. "When it left the house when we left session six weeks ago, it was 200 pages long. When it went to the governor, it came back as 300 pages long. This thing is unbelievable. It's not about marijuana, it's about anything but marijuana."

House delegates just last week voted 53-44 in favor of amendments that would expedite legalization from 2024 to July 1 of this year.

"We have put the cart before the horse. With what has passed now, as of July 1, you can grow four plants of marijuana in your house," Marshall said. "You can collect it but not sell it. Where do you get the plants and the seeds from? You can’t legally buy either in Virginia. The rest of the bill does not become law until Jan. 1, 2024, so we will have two sessions before this thing will come back again. That's a lot of questions to be answered."

During a recent trip to Fairbanks, Alaska, where commercial marijuana has been legal since 2014, Marshall noted gummy bears, cookies and other treats, adding, "That worries me. Gummy bears, what happens when kids see those things?"

Stanley equated the 2021 session to a "political jewelry store smash-and-grab." He claims democrats in Virginia know it's the last time they will hold the house, senate and governor's mansion at once, so they are trying to expedite tons of legislation that's not fully developed. Ruff echoed this analogy with regard to the marijuana bill, saying he feels the bill escalated from "zero to 100."

"When you go 100 miles per hour, a lot of times you run off the road. We're doing that with this process with marijuana," Ruff said. "There is no structure to the bill. People will have wrecks, they will do things they shouldn’t be doing on the road particularly, endangering their lives and other people's innocent lives. Law enforcement has no rules or regulations on how you control it. You can smell it, but are they impaired? What is the definition of being impaired? Those questions were never answered—they were never even looked at."

Driver safety was a key concern of Marshall's, as well.

"If a person is driving with blood alcohol content above the legal limit, there is a roadside test to see if the person is impaired," Marshall said. "The problem with marijuana is that, if a driver has smoked a joint or so, police can pull him over and suspect he is impaired, but not know without a [blood] test.

Localities can still decide if marijuana may be sold in their area, under current language in the legislation. But Ruff says this will hardly dissuade marijuana from changing hands anywhere in the commonwealth.

"Those who worked on the bill had no concept of the current black market for drugs," Ruff said. "If I'm a pot dealer and I have a list of people buying from me, why would I even consider getting a state license? My neighbor does the right thing and pays state tax. I'm not going to charge tax. Who do you think is going to get the business? It's just not well thought out."

Adams added, "Here we are coming out of a pandemic. People's lives have been disrupted. I was truly disheartened when I saw... marijuana on a fast track. Attention should have been on schools and helping businesses and dealing with some of the issues relating to the pandemic."

On the topic of public education, legislators said regionalism is to blame for the poor quality education being offered in Southside Virginia, especially relative to Northern Virginia, Hampton Roads and Virginia Beach.

"That's a $3 billion question," Stanley said. "Those areas [mentioned above] have shiny new schools. Where we see the problem is in the rural areas and in our inner cities. The Constitution of Virginia says we will provide quality education... it is too big a problem now because of neglect, the price tag gets higher every year."

Stanley put in three bills this year to amend the constitution so that all students would be entitled to the same educational opportunities, regardless of zip code. House democrats killed that piece of legislation.

"Over and over, we see an unwillingness to tackle a problem that's growing still," Stanley said. "Regionalism is preventing us from being successful in trying to find a solution. The greatest natural resource we have in Virginia is our children. We need to invest in our children, regardless of their zip code."

Legislators will be charged with budgeting out a one-time $3.8 billion relief fund this year, one Stanley hopes to discourage democrats from spending on pet projects in favor of broadband internet and school modernization.

"It is an interesting dilemma. A lot of it goes back to the way Virginia's system is set up—you have locally controlled schools with statewide policies and a convoluted funding apparatus," Adams said. "Trying to address it in a way that makes more sense and is evenly attributed to all regions of the commonwealth is something new for Virginia."

The Virginia Constitution does indicate a high school diploma from any school in the commonwealth should entail the same level of knowledge and skill. But Stanley pointed out that a diploma holder from a Fairfax high school, for example, is endowed with computer coding abilities. A Danville diploma holder will not.

"I have to agree that there is a regional difference," Adams said. "The majority of delegates in the leadership all come from Northern Virginia—majority leader, speaker of the house, parliamentarian and de facto floor leader. The fact that we have double-digit representatives from Fairfax gives you some indication of the challenge that Southern Virginia and most other regions of the state have. Northern Virginia is so dominant and their priorities are the ones getting most of the attention."

Halifax County adopted a one-percent sales tax that may only be used for education back in 2018. Marshall suggested something similar could be on this year's ballet in both Pittsylvania County and the City of Danville, adding, "Danville needs $100 million in upgrades just to break even."

"There is room for optimism," Adams said. "I don’t see this as a partisan issue, this is about a constitutional duty we have to educate children."

An additional question the chamber brought to the table was if the Pittsylvania-Danville legislators, all of whom are republicans, had collaborated across the aisle during the 2021 session. Each had.

"One that has been brought to my attention over the past year is how people are being treated in nursing homes and hospital settings...folks who were on their deathbed were not able to meet with family members," Adams said. "It was brought to my attention that we had these new virtual personal assistants [Amazon Alexa, Google Home, etc.] that people have come to rely on. One constituent in particular used that with her mother in a nursing home early on in the lockdown and came to rely on that. When her situation took a turn to the worse and she was moved to the hospital, the head nurse at that time denied the use of the device. That ended up being the wrong decision to make."

He continued, "My constituent was aware that her mother's days were limited. In fact, she died a few days thereafter. I came to learn that in the hospitals and nursing care facilities, it's very unclear what the policies are and they vary from place to place. I was able to gain widespread support with democrats to allow these devices universally. It passed unanimously."

Legislators also discussed the topic of the COVID-19 vaccine. While being largely more unpopular with republican voters, all four legislators have already received the two-shot vaccine. Marshall received his at Chatham Middle School. Stanley said he would recommend anyone to get it.