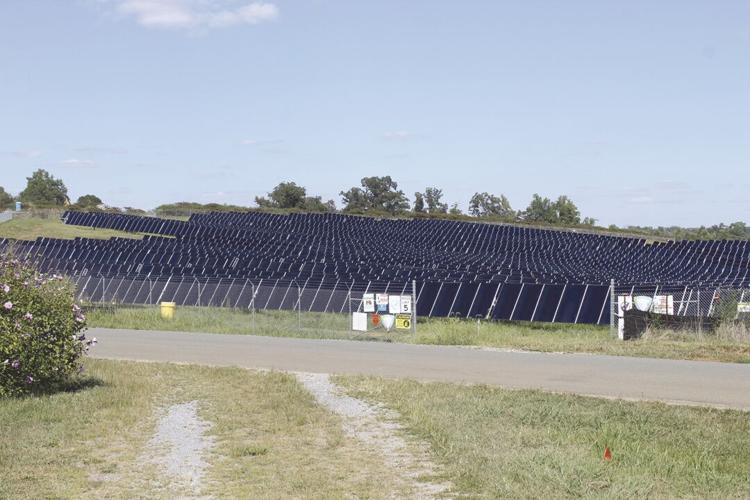 A solar facility is located nearly at the end of the Campbell's driveway in Climax. 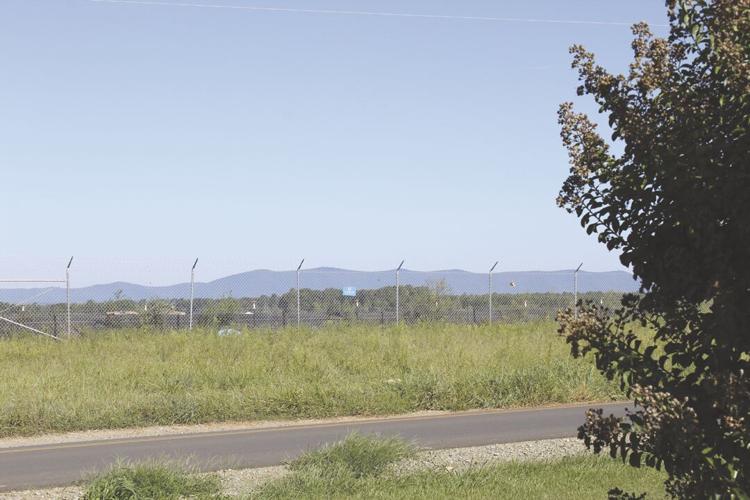 Susan Smith can often see Sharp Top Mountain from her front yard. She's unsure how the solar facility, still to be installed across from her home, will impact that view. 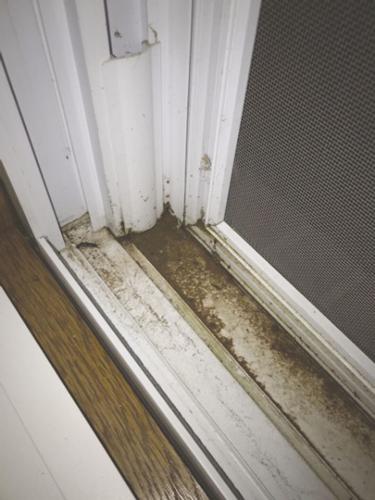 Susan Smith said that dirt from the solar facility being constructed across the street coated her house, her car and her driveway. It also sifted in through her windows and into the trunk of her car.

A solar facility is located nearly at the end of the Campbell's driveway in Climax.

Susan Smith can often see Sharp Top Mountain from her front yard. She's unsure how the solar facility, still to be installed across from her home, will impact that view.

Susan Smith said that dirt from the solar facility being constructed across the street coated her house, her car and her driveway. It also sifted in through her windows and into the trunk of her car.

After turning onto Climax Road from Route 57, there are initially fields of soybeans and tobacco, a few cow pastures and some houses.  As one gets closer to the village center of Climax, the fields give way to a sea of black, metallic solar panels. The panels are surrounded by tall chain link fencing with barbed wire at the top, giving them a prison-like appearance. Dump trucks travel along the two-lane road, as does a street sweeper — a vehicle used by the solar construction company to clear the dirt and mud from the road as trucks enter and leave the various solar farm entrances. Clinking, pounding and other mechanical noises can be heard as the poles used to support the solar frames are installed.

In all, the Maplewood solar project occupies about 1,200 acres on land previously used for crop and tobacco production.

The process of turning farmland into solar farms has been watched carefully by residents who live along Climax Road, many of whom are now surrounded by undulating acres of black panels.

“I feel like I’m on another planet. The panel planet,” joked Letty Campbell, whose house has a completed solar facility across the road from her house, as well on one side along Toshes Road.

With so many solar farms coming to Pittsylvania County, Smith wanted to alert residents who may find themselves living next to one and what they could expect.

Already, about 10,000 acres are slated for solar farms and more applications are entering the approval pipeline.

Smith qualifies her comments by saying that she isn’t interested in “panel bashing.” After all, she has come to accept their presence and sees no value in sitting around and complaining about her fate.

What has disturbed Smith is how intrusive the whole process has been so far.

“They won’t leave you alone and you’d better be prepared for it,” she said.

As the land was being cleared at the facility across the street, the dirt, dried out from the summer heat, coated her house, driveway and car, sifting under window sashes and into the trunk of her car.

With all the dirt and dust, she didn’t dare open the windows, but it got in the house, nevertheless.

“It made tracks like in the snow,” said Smith of the layer of dirt that coated her driveway and the road.

Not afraid to ask questions or lodge a complaint, Smith learned that a water truck was supposed to accompany this process to keep the dust and dirt to a minimum.

To compensate, Dominion Power offered to pay for her house and car to be washed. Smith and her neighbors took the utility up on the offer and had that done. But she’s doesn’t want to do it again. And she keeps an eye out to make sure a water truck is present when the dirt starts to fly.

The road sweeper, which has become an everyday sight along Climax Road, started using her driveway to turn around. After all, Smith has a nice curved driveway with two openings onto the road.

Smith called Dominion again and got that stopped.

The most disturbing thing for her, so far, was when the construction company used her address and began having packages delivered to her house.

The first time she was initially confused and accepted the package. At the same time, she tracked down the information from the return address and learned that it was a parts company that supplies solar facilities. She called the company and they apologized, she said.

“They always apologize for everything,” said Smith.

It happened again the next day, and Smith did not accept the package. When a package arrived a third time days later — in plenty of time for a change to be made — she got angry.

No one asked permission to use her address, and besides, what was their plan for retrieving these packages, said Smith, unnerved at the thought of people watching her house for deliveries.

Letty and her husband Tony said packages were also inadvertently left at their house, although the recipient did not use their address.

Letty said she must have delivered a dozen packages to the office that was located a bit further down Toshes Road. She figures that the delivery folks didn’t know the address for the newly established solar farm office, so for convenience they just dropped the packages at their house.

Both Smith and the Campbells have a view of the Blue Ridge Mountains from their front porches — in the distance beyond what is now a solar facility. Smith said it’s possible to see Sharp Top Mountain from her yard. She’s not sure if the panels, once installed, will block that view, and vegetative buffers have yet to be planted around any of the Climax facilities to hide the panels and prison-like fences. One of the biggest complaints by Pittsylvania County residents is the need for adequate vegetative buffers to block the views of the panels from the road.

The Campbells can still see the mountains, and have learned to look past the black solar panels that rotate each day as the sun moves from east to west.

Tony is a bit annoyed that the panels do not benefit them directly, as they are served by Mecklenburg Electric Cooperative and the panels are used by Dominion.

“It’s not benefiting us,” he said.

Letty misses the cows that used to graze in the former pastures around their house.

And with the construction complete and the panels in operation, it’s quiet.

“They (the panels) don’t bother us, they don’t speak to us,” she said.

“You don’t have to worry about neighbors getting loud,” said Tony.

Artie Tompkins lives across from the Climax Volunteer Fire Department. He has a solar facility to the right of his home, where he’s lived for five years.

Tompkins said there is more traffic on Climax Road now — but that comes as much from logging trucks as dump trucks from the solar farm construction, he said.

Prior to the solar farm going in next door, Tompkins said it was a crop field, which sometimes smelled when manure was spread for fertilizer.

Now it’s quiet because the solar panels don’t make any noise, said Tompkins, adding that they’re preferable to having a housing development go in next door.

“It’s part of the future,’ he shrugs, but wonders what the panels will look like in 10 or 20 years.

Most solar panels have a lifespan of 25 to 30 years.

Others living next to a solar farm were reluctant to say much about the facilities, as it has become a polarizing topic in the community, said one resident who has a solar farm to one side of her property and another across the street.

She figures she can either accept their presence or move. Right now, she’s shopping around for a fast growing evergreen species that can block the view of the panels.

At the same time, “they’re quiet neighbors. They’re quieter than my other neighbors,” she said.

Shirley Cooke said the panels have been in front of her house for about two years. All Cooke wanted to say is that she’s gotten used to them.

Sometimes the Campbells wonder if the panels would have any affect on their health, and after initially being overwhelmed by their presence, which began in 2019, Letty remains ambivalent.

“I still don’t know how I feel about it,” she said.

A South Carolina man charged with killing the mother of his child, then taking their little girl to Danville is back in the Palmetto State; A local lawmaker wants the state to study tick-borne diseases; Another tobacco warehouse could be getting a new lease on life; We'll highlight the winne…