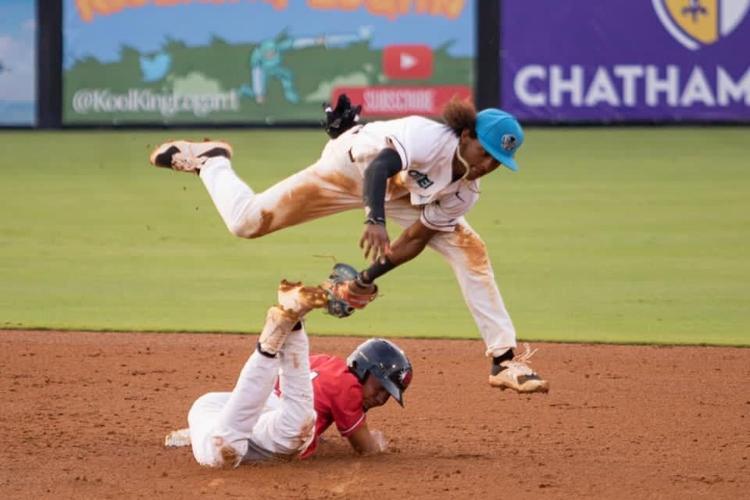 Otterbots infielder Jevin Relaford makes a dramatic play at second plate, having caught a throw from pitcher Tyler Judge to get a Bristol player out during a home game on June 9. 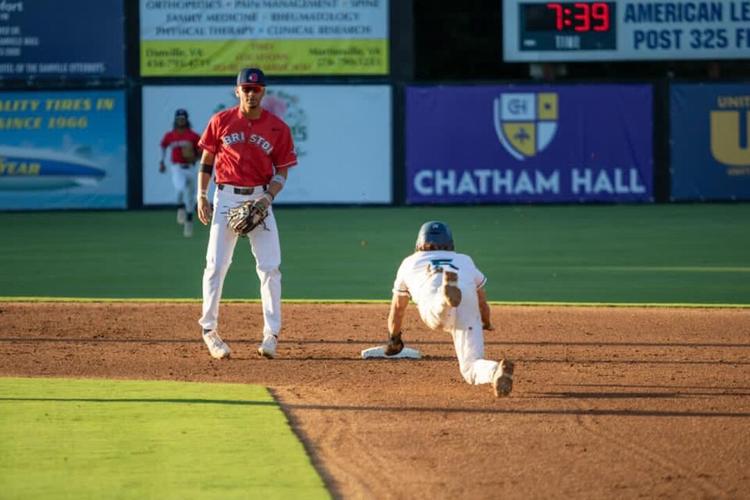 The Otterbots Cam Murphy takes a dive for second base against the Bristol State Liners on June 9 at American Legion Field.

Otterbots infielder Jevin Relaford makes a dramatic play at second plate, having caught a throw from pitcher Tyler Judge to get a Bristol player out during a home game on June 9.

The Otterbots Cam Murphy takes a dive for second base against the Bristol State Liners on June 9 at American Legion Field.

The game itself was a gritty and hot affair as it was 93 degrees at first pitch.

All was scoreless until the bottom of the fourth when Ty Acker hit a two-run double off of Trevor Callahan with two outs to bring home Johnson and Grant Stephenson. Danville would tack on another run when Corbin Lanowitz would steal second, having Acker score, putting Danville up 3-0.

Elizabethton would start cutting into the lead half an inning later with an Austin Roccaforte sacrifice fly to center, bringing home Avery Owusu-Asiedu.

The River Riders would get another across when Alex McCoy cranked a solo home run to center off of Sawyer Osborne, 3-2.

The two teams would trade scoreless innings until the top of the ninth when Kevin Martin would blow the save due to a Jonathon Soto single to left with two outs.

The Otterbot pitching roster of Casey Keller, Mario Fernandez, Tanner Smith and Colbey Klepper kept the State Liners scoreless in all but two innings in their first match up June 8.

The Bots were not so lucky the second night aginst Bristol, June 9, losing 4-6.

During the first game between the two teams, the Bots pulled ahead in the first inning, scoring three runs against Bristol’s pitcher Jeffrey Gonzalez. Luke Stephenson got one runner

home on a line drive down third base. Connor Bradshaw’s fly ball to left field, although caught by Bristol’s Hector Mangual, allowed two more runners to advance, pushing the score to 3-0 in favor of the Otterbots.

The Bots would score again in the second inning, making it 4-0.

Bristol returned to home plate in the top of the third to score their first two runs.

Tensions ramped up in the top of the sixth when the State Liners were granted four walks, sending one player home and leaving bases loaded for Otterbots pitcher, Fernandez. Bristol’s Sean Smith’s hit allowed another three runners to cross the plate, pushing the State Liners into the lead, 4-6.

After Bristol’s showing, the Otterbots struggled a bit in the bottom of the sixth with foul balls, a strike out and a fly ball caught in right field to make quick work of that inning.

At the top of the seventh, Bristol’s Jack Tomlinson got a walk against Klepper on the mound. There was a line drive, a dropped ball at second and a close call at second with Bristol’s Hector Mangual called out by the referee, leading to a dispute by a Bristol coach.

It was in the bottom of the seventh that the Otterbots regrouped. The pressure was on Danville’s Reginald Johnson, who came to the plate with bases loaded.

Bristol replaced its pitcher with lefty Trip Banta to shake things up a bit. While Johnson was at the plate, Patrick Keighran was able to steal home, putting the Bots within striking range of taking the lead, 5-6. Johnson received four balls and walked to first, again loading the bases in favor of the Otterbots.

A center line drive by Stephenson brought two players home, pushing the Otterbots into the lead at 8-6.

Bristol remained scoreless in the eighth and the Otterbots sent another runner home at the bottom of the inning to achieve the final score of 9-6.

The Bristol State Liners took the lead in the sixth inning in the second game at defeating the Otterbots 6-4 on their home turf.

The Bots earned a run Thursday in the third, but it was mostly a string of zeroes on the scoreboard until the sixth inning, when the State Liners kept the bases loaded and earned five runs.

Seemingly concerned about maintaining their lead after the Bots returned fire with two runs, the State Liners changed pitchers mid-inning, putting in Eza Gustafson. The State Liners switched pitchers again in the bottom of the eighth after a few Bots were walked and bases were loaded. A strikeout by the Otterbots Luke Stephenson quelled any hopes of sending those runners home and ended the inning.

The Otterbots traveled to Calfee Park in Pulaski on June 10 and 11 to take on the River Turtles. The Turtles defeated the Bots both nights, 7-3 and 6-4.

Zach McKnight joined the Star-Tribune from Wadsworth, Ohio, as a staff writer. Zach earned his bachelor's degree in journalism from Kent State University. Zach was also awarded 3rd place in Public Safety writing by the Virginia Press Association for 2021.